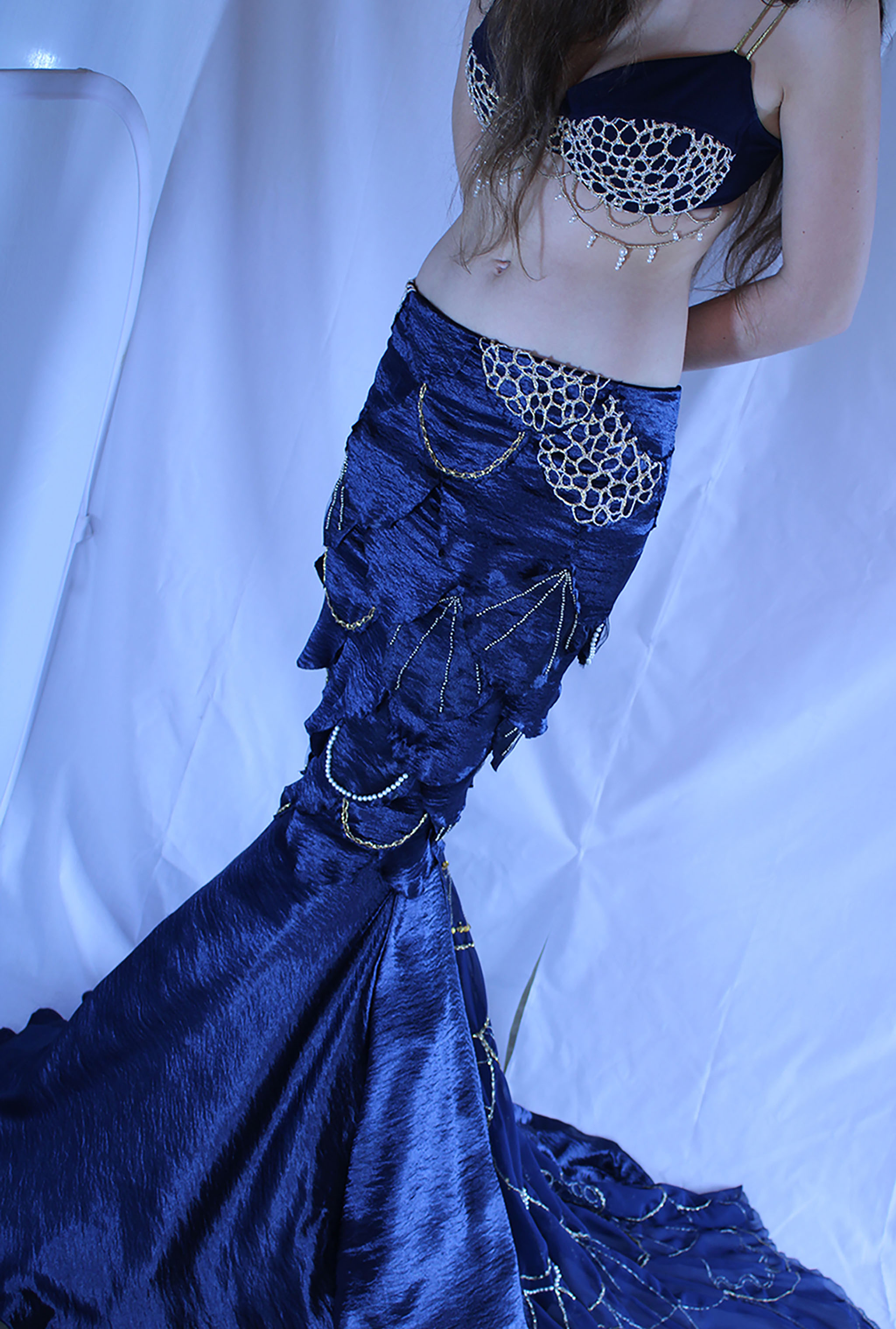 "My Major Textiles Project is constructed as separates: a mermaid style skirt and bra. This striking silhouette conveys my inspiration as the dramatic flare of the skirt contrasts the slim bodice to emphasise the shape of a mermaid tail. The bra is designed as a cross between a full figure and t-shirt style for comfort, promoted silhouette and additional modesty coverage. The costume includes functional aspects such a zipper, darts, back bra closure, adjustable straps, underwire and a boned hemline. All patterns were self-drafted without assistance. The bra was drafted through direct measurements and templating and the skirt through direct measurements. I was inspired by cultural aspects of mermaid lore from many nations. I utilised legends of sinister natures to inspire my choice of dark colours. The gold embellishments were chosen to reflect the sun on the water at dusk. The interplay of yellow and blue was also inspired by the captivating use of these complementary colours in Vincent van Goghs historic paintings Starry, Starry Night and Café Terrace on the Place du Forum. Historically, mermaids have appeared in many other artworks, represented in artworks by John William Waterhouse and Ferdinand Leeke. I combined the elements of these traditional representations with contemporary adaptations such as Disneys Little Mermaid. Contemporary designers including Alexander McQueen, Jean Paul Gaultier and Romance was Born inspired the silhouette of the design as well as a range of the techniques employed for an aesthetic garment. The upper half of the skirt features 54 pebble satin scales which are embellished using a range of beaded and lace overlays. The skirt has tulle support and a boned hemline to promote silhouette. The horsehair braid hemline was chosen to provide an organic shape to the skirt. The skirt also features a chiffon train, tambour embroidered with golden threads and beads. This fish scale pattern is mirrored in the drop beading feature of the bra to reflect the inspiration of nature. I incorporated innovative techniques of using a soldering iron to cut out the individual scales in order to heat seal the edges. I also constructed a gold lace by couching yarns onto solvy film to generate an innovative and customisable lace design to reflect the inspiration of bubble rings. Furthermore, the use of natural cabbage dying for the lining of the bra cups is an innovative and sustainable alternative to synthetic dyes as it reduces pollution to waterways."

"Tambour Embroidery, Location: Train, scale overlay.s Embroidery with a Lunéville needle creates a statement train and matching scale overlays to unify the design. The fish scale pattern conveys my inspiration with the beading being suitable for the costume as it reflects light and enhances the desired feelings of luxury."

"Soldering Iron Heat-sealing, Location: Scales. The use of a soldering iron to seal the edges of the scales contributed to the functionality of the costume as it stops fraying. It also aesthetically enhances the costume as no edging techniques were required, allowing the delicate fabric to remain lightweight and flat."