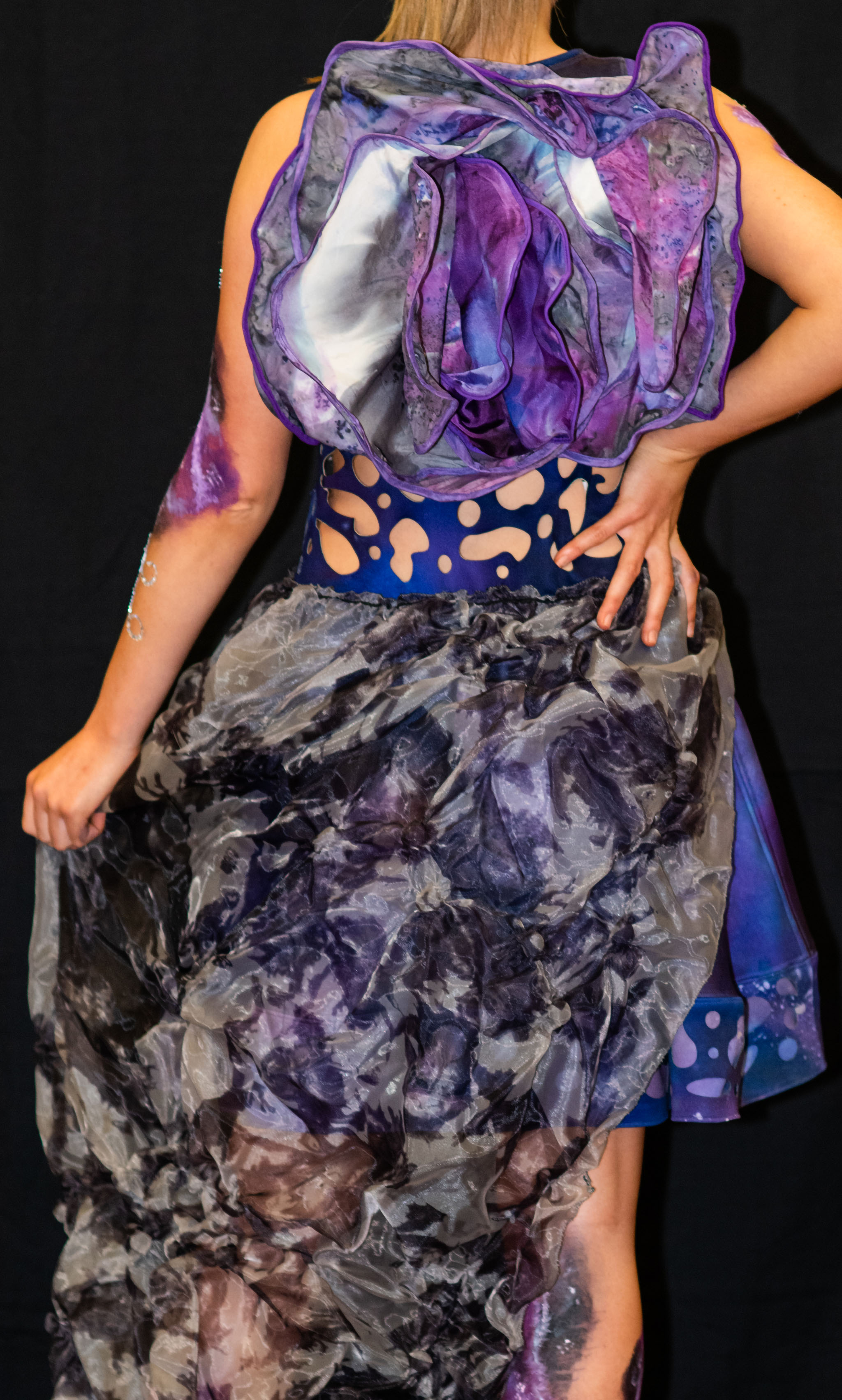 "My textiles major project Stardust was fabricated out of integrated and intricate elements, utilising many challenging art and textile techniques to create a galactic inspired costume. The inspiration for my garment was that everything is basically derived from two atoms, Hydrogen and Helium, symbolising how the complexity of life arises from a common simplicity. It is about unity and diversity. Stardust was created using my favourite techniques from design through to fabrication and included: creating my design on paper, editing it on Photoshop, using binding and wiring to edge the three-dimensional structure, and laser cutting. To create my dress design, I explored many different design options on watercolour paper, using Copic Markers, watercolour paints and pencils and gouache. I compared and considered my various representations of the Universe, but in the end, I used Photoshop to combine all of them into the one overarching costumed design, which was then sublimated onto my fabric. The three-dimensional structure on the back of the garment represents the orbital movements of objects in space. To create the smoothly curved edges, I bound the edges of the separate silk shapes, which had been painted and salt encrusted, and threaded wire through them to allow for easy transfigurations. Although engaging in this intricate process was stimulating and enjoyable, the fabrication of the three- dimensional structure was a great challenge. Binding the round edges was incredibly difficult, as was ensuring both sides were neat on finishing with the sewing machine. I used a laser cutting machine to cut the holes that symbolised the various shapes and spaces in the galaxy on the waistband and on half of the hem. The hem was then folded in such a way that it formed a solid backing for the laser-cut section. The main material I used to create my garment was Scuba Knit as it permitted stretch, movement, comfort and good drape, all of which representing the fluidity of the universe. Stardust taught me a lot about myself and helped me develop my organisational and time management skills, especially given the need to keep up with my other school subjects. I also learnt a lot about integrating theory and practice in textiles. The most rewarding experience for me in managing such a major project, however, was when I added the final touches to my garment and watched all my vision, focus, work and commitment come together."

"I used twin needling in the seams of the garment and around the laser cut waistband to create more stability. To prevent any bubbling in the folded over hem I twin needled the base. It was used for aesthetic purposes with creating a clean edge around the neckline."

"To create the three-dimensional structure on the back of my garment, I silk painted abstract versions of the universe onto organic shaped silk to resemble the movement of objects in space. I used rock salts to add sparked effects to look like stars and bound the edges with wire."